The Writing Process: Part I

This marks the first post in a series I’ll be doing that explains and explores the process of writing Heroic Catholic books. The main subject will be the writing of How to Become A Heroic Catholic: Volume 2 (title still undecided), so follow along for updates and progress reports!

Today we’re going to look at what went into the rough draft I finished last week.

So, a rough draft is the first draft of a book. It’s one that is meant to be done with as little looking back and editing as possible, the main goal being to get it done. There’s a lot of “free-writing” involved, at least for me, but also a lot of thought and research goes into it. I created a virtual ‘Sticky-Note Board’ on my computer, where I could stick ideas and reorganize them before transferring the text to my book’s document, and I had several other documents that I stuck quotes into or Bible verses to reference, etc.

Because, like with baking or cooking, you can’t get started until you have all the ingredients in front of you. Granted, you might discover that you forgot an ingredient (or in the book’s case – a major source I wanted to use) until you’re halfway through, but at this stage all mistakes are easily fixed.

This rough draft began back in spring of 2016, when I copied the text from a talk I had given into a clean, fresh, Pages document on my computer.

The talk was ~5,000 words long and needed a lot of help if it would become a book. I split it into sections and started fleshing out the parts I wanted to keep, deleting other parts that wouldn’t be relevant to readers. At this point I also started to form my structure, the plan for how the book would proceed. It was something like this:

Very basic. Very general. Good enough to begin with. Also something that would change a lot, because as I kept writing I knew I was missing something major but I couldn’t figure out what. I put the project aside and let my mind work things out with it for a few months, because if I kept trying to force the words or force the structure – I was going to regret it.

When I picked it back up, at the end of summer/ early fall 2016, I opened up my virtual sticky-note-board and did some major reorganizing. I was starting to figure out my structure and how I wanted things to go, but it still wasn’t quite right. I reached over 20,000 words in August and then once again put it away. There was something missing, something still not right, and I was just getting mad at the keyboard for not typing out exactly what I wanted when I didn’t know what I wanted myself. It stayed put until spring 2017. I worked on some videos, put together presentations, got busy with school and other writing projects that felt more pressing.

By that point I was debating if this was even a book I needed to be writing, or if it was a project I had given myself to make myself feel good or feel like I was actually accomplishing something in life, since it seemed everything was slowing down. Rough drafts are rough! On both the mental and spiritual levels. 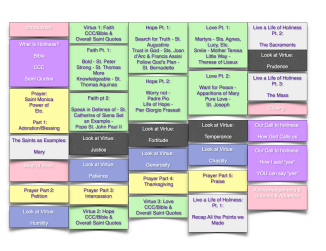 When I decided to open the document again in early spring, I reorganized my Sticky-Note-Board once more, adding in a theme of virtues to go with the Saints. I’d hit some virtues more than others, but I wanted to include them all! I spent more time on that than I had on writing in weeks, but it felt good to get something done. Each Saint, I decided, would have a virtue and a simple message associated with them.

Then, in late May, it finally dawned on me. I figured out the structure and organization I needed! I found the last Saints I wanted to add in, figured out which ones I needed to cut out, and spent a week reorganizing (yeah…I broke the rule of ‘no looking back’ while writing a rough draft, but it was worth it.) and formatting the document.  There would be an introduction, 3 major sections (Faith, Hope, and Charity), and a closing.

I reached my word count goal for the rough draft in a matter of weeks, (~31,000), or about 130 unformatted pages, and printed out a copy on the eve of my 20th birthday! That was the best present I’ve given myself in years, because having this monstrous project actually done (well, one stage done anyway) took a huge weight off my shoulders and gave me a clear plan for the next months – which is something I’ve needed.

So that, is how the rough draft of Heroic Catholic: Volume 2 came around! It took over a year to complete, countless reorganizations, too much editing-while-writing, and a whole lot of prayers.
Now for the real job to begin. My first book took 14 drafts before proof and publication. I’ll expect something similar for this! Watch for the next post, where we’ll look at what happens in the all-important first round of editing!